Like most modern spaceships the CSN F9 can be described as a single-stage exhaust-mass-augmented fusion rocket with the block diagram below: 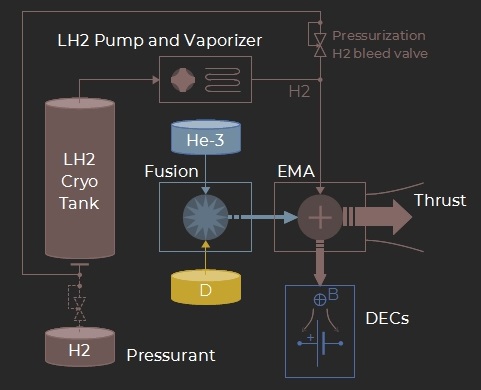 The Exhaust Plasma Confinement Units (EPCUs) manage the exhaust plasma in the EMA chamber, nozzle and DECs. They are distinct from the FPCUs (fusion plasma in the reactor vessel).

Given a ΔV requirement a maneuver can be flown with many different thrust levels and reactor power settings. The thrust directly governs the acceleration and thus the burn time. The fusion power to thrust ratio must also be considered knowing that in average over the whole mission: ΔV budget · thrust = η · fusion power.
η is the conversion efficiency from the fusion thermal power to the of the expelled plasma’s kinetic power at the nozzle output.
It would appear that it is always best to use a large power to thrust ratio. However some equipment reliability considerations must be taken into account and in general:

The table below shows the possible thrust regimes at maximum fusion power. The minimum thrust is limited by the reactor temperature and wear rate of the DECs. The maximum is set by the H2 injection system.

The CSN F9’s flight controller will suggest a power setting given a target thrust input. However as a captain you will always have the final word at the flying time. On the other hand the thrust value is determined at the flight planning phase and cannot be modified on the run (this would modify the actual trajectory).
Also as you upgrade your ship you will be able to re-calibrate the flight controller’s internal reference performance data. This is very important because the flight planner also needs it to correctly model the ship’s mass all along the flight plans.

Depending on the situation the fusion controller regulates different quantities in the EMA chamber:

Spooling-up the reactor takes time and it must be ready before the main engine start, otherwise it is not be possible to generate the planned amount of thrust. Worse, trying to start the burn nonetheless is likely to trigger safety protections against a “bremsstrahlung flash“. This is what happens when the EMA is starting to accumulate a large quantity of plasma that correspondingly generates a large braking radiation, rapidly damaging the chamber’s lining.

Note: the target power is not specified as it makes little difference given the kinetics of the fusion reaction. Increasing the plasma mass as a fixed fraction of the fusion power leads to a solution with finite time to singularity (power → ∞). The behavior is not exponential as might be expected.

Powering-up ahead of time is to be avoided too: while the EMA remains in DEC mode regulating the temperature with a large flow of fusion plasma requires a correspondingly large flow of hydrogen that is wasted away. Also at high power levels the systems’ temperature might also become a problem. Under thrust the large flow of liquid hydrogen being evaporated and heated significantly participates to the cooling power. Without this effect overheating is likely and the wear rates increase.

As a captain you will always be in charge of the fusion power level and no automation will interfere with your choices. You will have to constantly adapt the reactor’s state to the ship’s situation (navigation, tactical considerations…) and anticipate ahead to balance operational response time with endurance and systems wear.

The following video illustrates the EMA DEC and THRUST modes, and how the ship’s advisory system provides help with the reactor’s power level management in practice.