The precision of all positioning sensors is limited and their output can be expressed as:

εPNAV is considered a random signal (i.e. “noise”) although its characteristics are generally closely related to deterministic characteristics from the sensors themselves (systematic delays, processing biases…) or the configuration of the position computation problem (conformation of a satellites’ constellation …).
As such it is quantified using its rms scalar value (root-mean-square) that can be interpreted as a probability. In a rough first approximation the chances that PNAV is within:

In relation to jumps 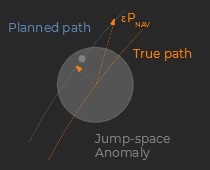 A jump occurs whenever the jump-point enters a correctly modulated anomaly bubble. Therefore a jump may fail if the navigation error is too large.

However the perpendicular component to the flight path is the only one that matters for the particular problem. Statistically this gives a [2/π] multipler on the effective position error for jumps, and the following table:

Over long periods of time the position error remains bounded in relation to εPNAV rms and does not accumulate over time. That is in first approximation εPNAV = constant and therefore its first derivative εVNAV ∼ zero.

The signals from nearby radio navaid emitters constitute the primary source of positioning information. They are received through dedicated comms units slots, and then processed by the comms controller.

The PPS system features a set of short-range high-precision navaids that are used around stations during the departure and approach phases. It requires a comms-unit on the SRPS channel set to operate (which can be the same as the one used for the SPS system).

The SPS system (or GPS for Global Positioning System) relies on range measurements to multiple satellites arranged in a constellation. Similarly to the PPS the signals are received by one or several comms-units. A minimum of 3 satellites must be within range for a slightly degraded accuracy, and the nominal performance is achieved with the signals from 4 sources or more (4 signals enable a perfect time synchronization between the ship and the constellation).

The effective SPS accuracy depends on the conformation of the constellation as seen from the receiver. Intuitively the more “at right angles” the satellites are and the better the accuracy. The phenomenon is called dilution of precision and is expressed as a multiplier on the nominal accuracy: εPNAV,SPS = DoP x [Nominal SPS accuracy]

At equipped terrestrial planets it is generally possible to compute the position using a single comms slot at low gain (many satellites being in range with this setting).
On the other hand the larger distances at gas and ice giants usually require the targeting of individual satellites at high RX gain.

Whenever it is not in range of SPS constellations the ship has to rely on natural objects to compute its position, more specifically: pulsars.

The x-ray signals emitted by pulsars exhibiting a highly-regular short period (< 40 milliseconds) can be used to triangulate a position, in a way that is very similar to SPS. The CSN-F9 carries three sets of x-ray telescopes dedicated to that purpose. The selection of the best sources at a given location and time is automatic.
However the signals from far away pulsars can be faint, heavily distorted, and are obviously not optimized for optimum synchronization. As a result a significant integration time (several hours) is required to filter out the noise and achieve the nominal precision.
Part of that learning process is invalidated by jumps due to the variations in the pulsar signals between the departure and the destination. As a result the accuracy of the XPRs is degraded after a jump until they have converged on the new configuration again.

The ship’s attitude information is provided by optical scanners that use the surrounding star field as reference. They are technically part of the XPR units, and deliver their high-precision orientation signal immediately after powering-up.

The INUs feature high-precision accelerometers and laser gyroscopes for all 6 degrees of freedom of the ship’s motion (3 translations, 3 rotations). The sensed data is then continuously integrated to infer the ship’s current state (position, velocity, attitude) without the need for an external reference. The technique is called dead reckoning.

The motion sensors are not perfect and exhibit systematic biases. To prevent a resulting rapid accumulation of large errors in the integration process the sensors need to be calibrated. During this phase the systematic errors are measured against a reference source so as to be mathematically cancelled during normal operations. The more accurate the source, the better. The calibration is triggered automatically whenever a positioning signal is available and is estimated to be more accurate than the current stored reference.

A steady blue color and the ⯐ symbol indicate a calibrated INU. The calibration index is featured above the button.

A blinking blue / amber color and the ⨳ symbol indicate an un-calibrated INU. The calibration index is featured above the button in amber.

Besides their dead-reckoning function the INUs are in charge of aggregating the various navigation sources into a single signal that is fed to the flight controller. The operation is performed based on the selected source, and leads to three possible modes:

The selected source is set by the source selector. In auto mode, the INUs select the signal with best estimated precision.

The Navigation Systems panel is located in the helm station: 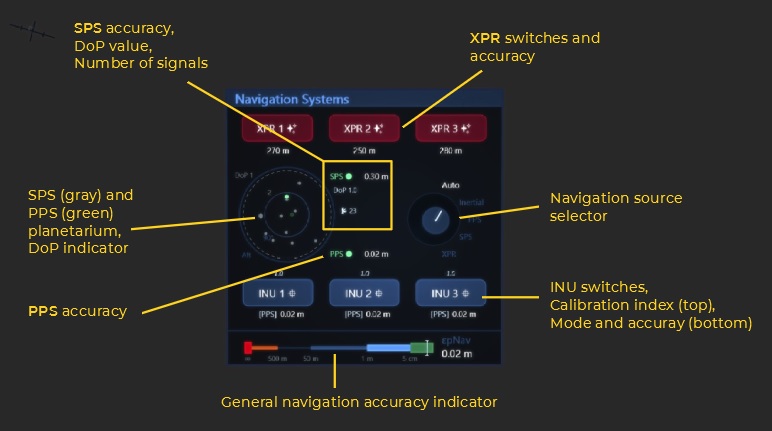 The navigation systems are demonstrated in the following video: